The McDonnell-Douglas DC-10 was a medium to long-range, wide-body, trijet. Its design featured an engine mounted on pylons under each wing, and a third engine mounted in the base of the vertical stabilizer.

Designed as a successor to the McDonell-Douglas DC-8, it could carry 380 passengers up to 6,600 miles. It was marketed to those airlines seeking a jetliner smaller than the Boeing 747 but with transcontinental range and wide-body comfort for passengers.

To continue development of its tri-jet airliner series, McDonnell-Douglas designed the MD-11, which features a stretched fuselage, longer wingspan with winglets, a smaller tailplane, new engines and a glass cockpit.

In 2016, about 120 MD-11s remained in service with cargo operators, mostly with FedEx Express, United Parcel Service, and Lufthansa Cargo.

To allow commonality between the DC-10 and MD-11 for airlines such as FedEx Express which operate both types, McDonnell-Douglas offers a cockpit upgrade to the DC-10.

Beginning in 1996, this upgrade included the installation of an advanced common flight deck on the DC-10 ... the aircraft was then redesignated as a MD-10. This allowed a common type rating for both the MD-10 and MD-11, and also eliminated the need for a flight engineer.

A military aerial tanker version of the DC-10 was developed for the United States Air Force, and operated as the KC-10 Extender. It employs a mixed hose-and-drogue and flying-boom refueling system, and can refuel military aircraft of the U.S. Air Force, Navy and Marine Corps. It has twice the refueling capacity of the Air Force KC-135 Stratotanker. 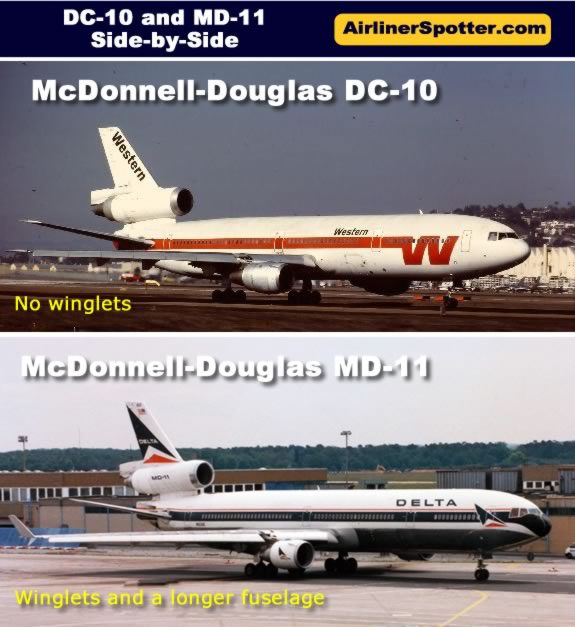 The McDonnell-Douglas DC-10 and Lockheed L-1011 Tristar are similar in design and size, each featuring an engine under each wing, and a third engine mounted in the tail. The distinguishing difference in the two airliners is the design of the third engine.

On the L-1011, Lockheed used an "S-duct" air inlet embedded in the tail and upper fuselage. Engine exhaust is at the tail of the aircraft.

Engineers at McDonnell-Douglas used a different approach, with a straight-through engine design, with the exhaust in the tail structure itself.

See spotting chart below showing a side-by-side comparison of the McDonnell-Douglas DC-10 and Lockheed L-1011.